Ever since they became popular around 1999  playing DVDs is something that’s vexed Windows users. Isn’t as easy as just having the correct hardware (DVD Drive).

Over the many iterations of Windows since 1999 playing DVD’s natively seems to have been something that even Microsoft can’t decide upon themselves. Some versions of the O.S. such as Windows Media Centre versions had the capability as standard, with some versions a ‘codec’ could be freely installed and with still other versions it needed additional software.

With Windows 10 the ability to playback DVDs natively seems to have finally gone away for good. This means you now need additional software of which you have three choices:

Whilst the first two options are valid and will work, why pay for DVD playback if you don’t need it? So we will look at option three.

Our preferred option for free video playback is the venerable and highly respected VLC Media player. Which is free to downloaded from – https://www.videolan.org/vlc/

We like this program because in addition to playing DVDs it has the ability to playback pretty much any video file format you care to throw at it making it a great tool for viewing footage shot on phones, tablets, cameras etc. Additionally it also has some basic screen capture software which can prove to be quite useful.

Note – at the time of writing the version of VLC available through the Microsoft Store doesn’t play DVDs. If you need DVD playback use the version from the link above.

Once downloaded run the executable file to install it, and let the installer do its magic. You may need to keep and eye on the options as you go through the installation to make sure the ‘Disc playback’ option is selected.

After the program is installed insert your DVD into the PC, start VLC and select ‘Open disc’ from the ‘Media’ menu. If you have more than one disc player select the correct one and click ‘Play’ 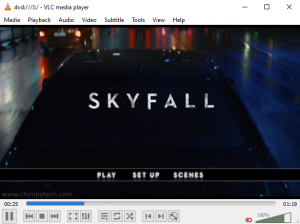 A DVD Playing in VLC on Windows 10