One of the things included in Microsoft Edge in Adobe Flash Player, however over the last few years Flash Player has started to become a deprecated technology, and is losing ground to web standards video playing techniques.

Also, it has been widely exposed as being full of security flaws, and is frequently used by many malware infections as the entry point in to a compromised system. For this reason many browsers do not include Flash Player as standard, and some such as Chrome use their own player as an alternative.

If you want to add an extra layer of security to Microsoft Edge then we would thoroughly recommend disabling Flash Player as standard, and then just re-enabling it purely when you need it. 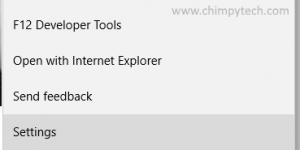 This is simply a slider to switch between ‘On’ and ‘Off, sliding to ‘Off’ will disable Flash Player and sliding to on will obviously re-enable it again.