Retrieve a Window That Is Off Screen

Sometimes when using Microsoft Windows you can move a window off screen to such an extent that it is impossible to grab it and bring it back on to your screen again. This commonly happens with laptop users who plug their machine in to a second screen, and forget to move the window back on to their main screen before disconnecting the second screen. It also can be caused by desktop users who have multiple screens, with windows spread over all the screens – if one of the screens fails then it is common to find a window off screen.

The basic sequence of events for this fix works across all versions of Windows from XP through to Windows 10, we have used Windows 8 for the screen shots here, so your icons etc will look a little different depending on your Operating System. 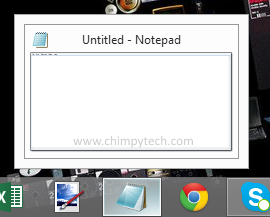 Once you have the thumbnail in view, right click on it to view the context menu, then click on the option ‘Move’ 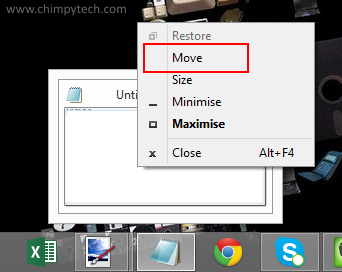 If the ‘Move’ option is greyed out, then it probably means that the window is not just on a different screen, it has also been minimised. If this is the case simply click ‘Maximise’ or ‘Restore’, and repeat the above process.

(although you won’t be able to see it yet.)

Press and release any of the arrow keys on the keyboard

Now use either the keyboard arrow keys or the mouse to move the offscreen window back on screen again – note, you may have to experiment with the direction you move in until you see the window. One it’s where you want it either left click the mouse, or hit enter on the keyboard to drop the window in place